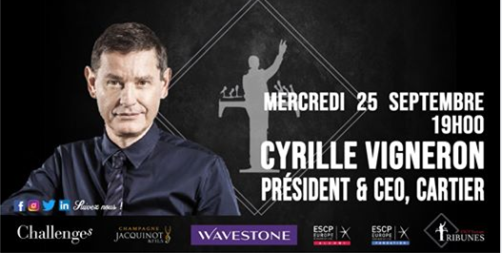 The President and CEO of Cartier, Cyrille Vigneron, was the guest of honor of the Tribunes Student Society event on the Paris campus. He described his career path and shared his expertise in the luxury business.

Graduated in 1982 from ESCP, Cyrille Vigneron admits that he has never established a career plan. “I was denied positions I had asked for, and was offered positions I had not asked for,” he told the audience. Which is how it came to be that he started his career in the manufacturing industry, first at the Compagnie Générale d’Électricité and then at Pechiney.

Today the big luxury companies are popular with business school students, nut this has not always been the case: the sector was once considered “frivolous” and unattractive. In spite of this, in 1988, he joined the sector as Director of Cartier Japan where he nurtured his interest in Japanese culture.

Cyrille Vigneron observed a turning point in the luxury world in the 1990s, when it became a flourishing sector that recruited a large number of graduates from leading business schools. It was during this time that the public authorities begin to integrate this sector into their industrial policies, especially since the major French luxury « maisons » are job creators.

All the major jewelry brands share the same values of excellence. Cartier is singled out for its history and its desire to create timeless designs. The Brand’s both feminine and masculine roots differentiate Cartier from other more feminine French luxury brands such as Chanel.

Luxury: a sector in transformation

“The luxury sector is doing well and has good growth prospects for a long time to come” .

When asked about the sector’s growth prospects in a digital economy, Cyrille Vigneron was very confident about the future. “It’s a sector that is doing well and has good growth prospects for a long time to come,” he says. He emphasized that the luxury sector has the advantage of creating objects that are made for pleasure. According to him, “the more free time we have thanks to  robotisation, the more time we will have for leisure”. Major luxury firms are taking advantage of this new era to develop digital communication strategies to strengthen their brand image.

As for the company’s social responsibility, Cyrille Vigneron states that Cartier intends to go further in its environmental responsibilities, in particular by focusing efforts on identifying the origin of diamonds.

Among its commitments is also gender equality. In 2006, they created the Cartier Women’s Initiative Awards competition, which recognizes the best socially-oriented entrepreneurial projects carried out by women. While companies with more than 250 employees struggle to ensure gender equality, Cyrille Vigneron proudly points out that women represent 62% of Cartier’s employees and 58% of its managers.

Finally, when asked about the profit margin generated by luxury watches, Cyrille Vigneron did not wish to provide any figures. Instead, he drew a parallel between a Cartier watch and a work of art. “It is difficult to evaluate a work of art as the price of the canvas and the paint. If you want a product that expresses an identity, it will cost more,” he says.

Cartier has not suffered from recent economic swings, as evidenced by its eleventh place in the 2018 Brand Finance ranking of the most highly valued French brands, at an estimated €8.4 billion. There is no doubt that Cartier may look forward to a bright future.