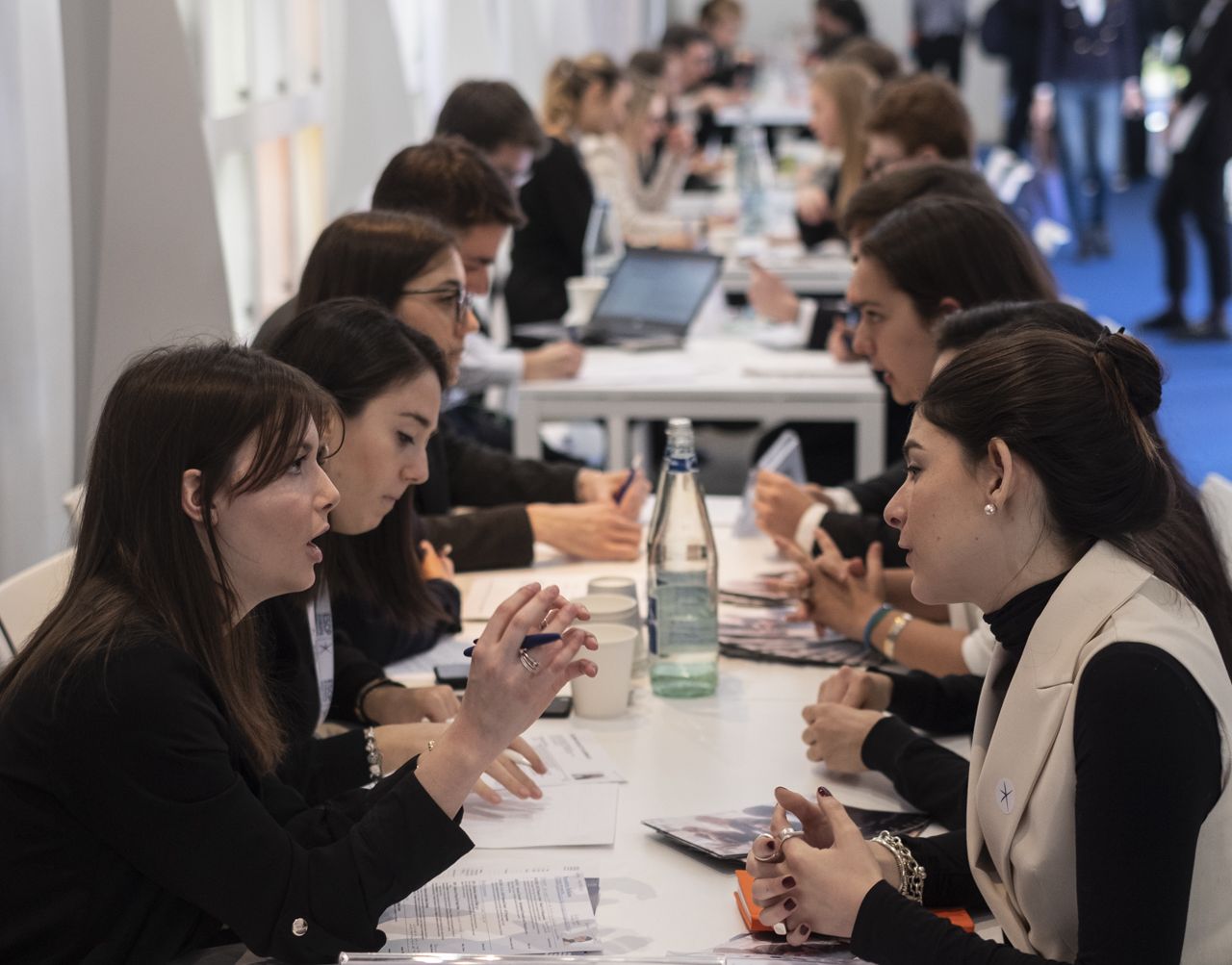 Launching Your Career Abroad: Can you get a job in France without speaking French?

France, as one of the most visited countries in the world, is a very attractive place to live a new experience – whether it’s for the short or long term.

Moving to a new country is not easy. Indeed, not only is the language often different from your own, but the culture can be completely different as well. If you want to make the most of your stay, you should learn as much about the culture – and as much of the local language – as you can. This is especially true when it comes to looking for employment.

As far as France is concerned, if you want to make the most of your stay, you have to know how to speak a decent level (B2) of French.

ESCP Business School staff and masters students share their advice and experience  on obtaining an internship or a full-fledged job in France.

Do I need to know basic French before arriving in France?

As in any country, it is important to learn the basics of the language before arrival.  First of all for your daily life: going to the supermarket, asking for advice in a bank, talking to your neighbours, etc.

When she arrived in France from China, Yinchuan Qian had an unpleasant surprise. She explains, “I didn’t speak French at all because I thought Paris was a cosmopolitan city and not speaking French wouldn’t affect my life and studies. But, after a few days in the city, I found that the reality was slightly different, especially for my everyday life”.

Even if you do not have the opportunity to learn French before your arrival, you can still do so during your stay. Is this realistic?

“The answer is yes!” said Yinchuan. “It’s a wise choice to learn French in France because this would give me a good accent. All of my classmates have helped each other out and everyone has been a teacher. With me, they were really patient and willing to help at any time of the day or night. In the MSc in International Project Management, we do not have language courses to choose from, so my advice will be to organise your schedule to take on-site language courses in Paris. As I can’t find a time slot suitable for one of those, I learned French following a free online course. This has worked for me, but I think that it would have been faster and easier to learn it in person.”

Vikram Timiri, a Master in Management engineering graduate from India, added, “Once it was confirmed that I was going to France for my international business studies, I started studying French. I studied French for 2 months before coming to France. But to be honest, what I learned was very basic: like saying hello, thanks, and asking for help.  I am not an expert for sure, but I actively put effort every day into learning and studying French. I love learning languages and French is undoubtedly a fascinating language.”

#1 Do I have to speak French in order to find a job there?

Paris can be perceived as an international city where everyone speaks English. But as far as your career goes,  it’s not that simple. Colin Kramer, Careers Advisor and Coach in the ESCP Paris campus has a few tips.

“My advice would be for future students to start language courses before they arrive in the target country“. Speaking English is not always sufficient in a European country such as France; to increase their chances of finding a good position, acquiring professional proficiency in the language is always a good idea.

If they are not proficient, students need to network and have Career conversations with people in their target companies, to find out which jobs/roles are international and be sure that English will be sufficient.

Foreign students, besides learning the local language, need to read the press & listen to podcasts to learn more about what is happening in the industry of interest, and find out who the key players are.”

#2 How easy is it for students to get an interview?

It is true that getting an interview is not an easy task for anyone, and that can go double for foreigners. Vikram explains, “It was hard. As an international student with no prior work experience and not being a francophone definitely made things more challenging. That’s when I contacted the ESCP Careers Center and asked for their guidance, which definitely helped me.”

“From my experience, the probability of getting an interview is not the same for young and well-established companies.” replied Yinchuan. “The probability of getting into a small company if you don’t speak French is much lower than that of a well-established one, because the objective of small companies is to develop the local French market, which requires interns to be fluent in French and communicate with local target users. But for large companies, they have the expansion plan to develop overseas markets, which gives opportunities to other language speakers.

So for me, It was really difficult to get an interview from small companies (less than 10 responses in over 100 applications), that’s why I changed the direction to find an internship in big companies (about 50% responses from local companies based on the position I applied for).”

Getting an interview and landing an internship depends entirely on the person. In fact, students who are very active, and are sensitive to cultural differences have an easier time getting an interview with one or more companies. A student who is less motivated, less active and above all who does not respect the local social mores, even if he or she speaks the language, will have more difficulty in getting positive feedback.

#3 Will I be able to get along with my coworkers?

Being able to get a job interview with a company for an internship is the first step, and landing it is the second. Now that you have arrived, will it be hard to feel like part of the team?

Vikram was lucky to find his dream job in a French company with activities all over the world. “The company I work with is an international company with offices and factories in Asia, Europe, North America & South America. So naturally, English is the official language in the company, which worked in my favour with regard to team integration. But I do have some colleagues in my office who do not speak English, so I take that as an opportunity to practise and improve my French with them. And these colleagues are more than happy to help, which ultimately leads to good work relationships.”

Andrea Clarke, an Australian native in the Executive Master in International Business, had a different experience. She said, “A few years ago I worked at an international university in France. I was able to perform in my job and interact with my international (including French) colleagues perfectly well as our activity was entirely in English. But when it became a social setting, like at a coffee break, it was hard for me. My French colleagues preferred to speak their native language and I often could not keep up with them.”

#4: Should I ask for advice from the School or the Companies?

In many circumstances, it is important to be well surrounded to receive and listen to advice. Here, we would like to share the feedback of these two students regarding the ESCP entourage.

Yinchuan shared, “Everyone involved in my life, study and work, even my landlord, gave me the suggestion to learn French and the level should be ideally at least C1. Another reference for the potential non-French speaking students is that I still need to speak basic French in daily communication with colleagues although my position is English/Native language-required.”

“I always feel my French is not good enough. Maybe it is human nature to not be satisfied. But interestingly during the last review with my manager, she was very impressed by my level of French (considering I have been in France for 1.5 years and I am learning on my own). I was able to complete a few tasks successfully where I had to speak only French (intermediate level). But personally, I still feel I have a long way to go and improve.”

Paola Magnat, Head of Student Affairs at ESCP Business School, shares about her own personal experience, “As a foreigner arriving in France, it is important to follow some advice! First of all, the importance of knowing how to speak French cannot be taken lightly: you should learn to speak some French before arriving in the country. Knowing the basics of the language will help you integrate better, both socially and professionally.

I am originally from Bolivia and have been living in France for 12 years now.  Before arriving in the country, I learned to speak basic French in order to get by. I learned that as a foreigner in France, knowing the language of the country opens more doors in terms of career opportunities.

Another piece of  advice I can offer you would be to join a big company in France if you don’t know how to speak French. Many large French companies have English as their main language. This strategy would be more effective for students who do not speak the language.”

Moving abroad to study and then work is a daunting – yet utterly rewarding! – task. To maximise your chance of success, you need to be aware of cultural differences, which of course includes language.

By speaking the language, it will be easier for you to use official websites, such as health insurance, to find out about all the steps and procedures to follow before arriving in the country. In addition, your daily life will be much easier: negotiating a lease, setting up a bank account and even choosing your favourite foods in the supermarket cannot always be done in English. For those who, like many ESCP  graduates, launch or take their career to the next level in France after they’ve finished their degree, French proficiency is very important.

Finding a job in France, like in any country not your own, can be difficult, but if you stay motivated, active and follow advice, you can achieve your goals.